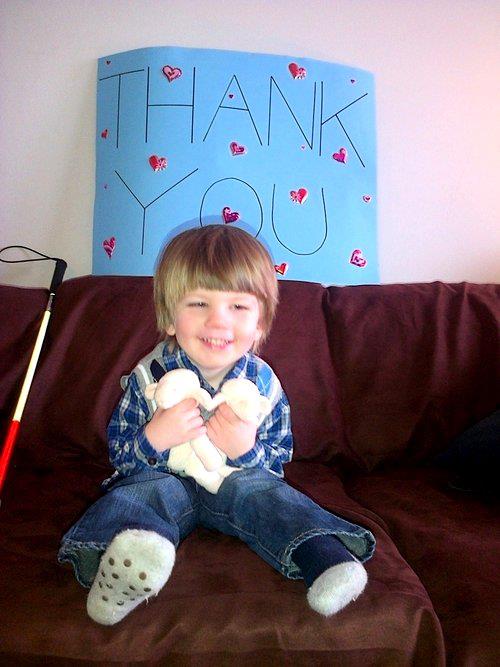 Here at Douglas Company we get daily reviews, calls, emails and stories from our customers. Often they are about how much they love the softness, quality and overall cuddle-worthy-ness of our product. Sometimes they are about a product they wish we could create or one in which we could improve upon. Always, we are grateful for these messages; they bring us insight, pats on the back and information on how to be as great as possible. Sometimes we are lucky enough to hear amazing, heart-warming stories about how Douglas stuffed animals have helped someone through a hard time, have been loved to near tatters (which we know is super hard to do!) or have significantly impacted upon a life. This past year two of those truly awesome stories stood out. Mason: London, Ontario Meet Mason, a four-year old little boy who lives in London, Ontario. When he lost his beloved “Lambie” in a local shopping mall his mother put out a plea for help along with a $200 reward on a local social media site. In a matter of hours Mason’s story and the search for his Lambie went viral. 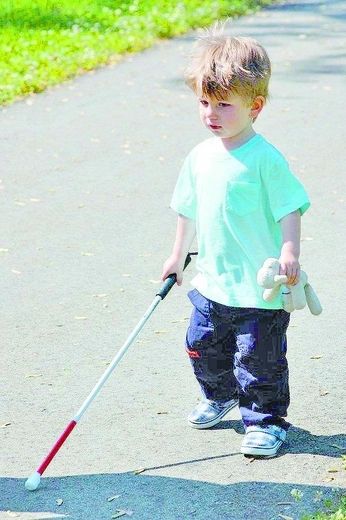 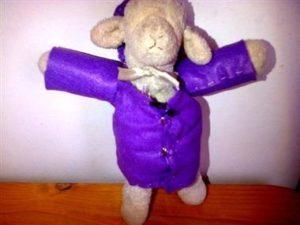 You see, Mason is blind and, as his mother shared, has used his special lamb rattle to calm him, ease his tension, and bring him assurance in a world that is sometimes overwhelming. Without his Lambie Mason was lost.

It quickly came to the attention of our offices in Keene, NH as Mason’s beloved Lambie was a plush lamb rattle manufactured by Douglas Cuddle Toys. Although the product had long been discontinued the folks at Douglas rushed in full-swing to get not one but two replacements for Mason. And they even included a custom tag for them!   Within two days Mason was reunited with his new Lambies. And although they were new and not yet fiercely loved we are hopeful that they quickly become just as special as the original. Mason’s mom sent us this (ah-mazing) photo after he opened the package we sent… What a glorious smile you have Mason! Enjoy those lambs!! 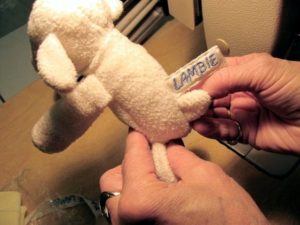 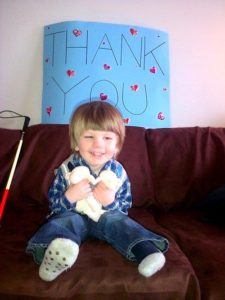 Photo Credits: http://Ifpress.com   Azriella: Strafford, NH In April we learned about an 11 month old little girl named Azriella living in Strafford, NH who’s family had suffered a terrible loss when their home and all their belongings were destroyed in a house fire. Thankfully Azriella, her family and their pets all escaped the fire unharmed. However, in the fire Azriella lost two very important items, her glasses and her stuffed monkey, Juno. Azriella was born two months prematurely and from the days during her stay in the NICU until the fire took her home her Juno monkey was in her crib every night and a hugely important part of her life. Azriella’s mother contacted a specialty retail store in search of a replacement for her special monkey. Although the store didn’t have one, they made phone calls which lead to more phone calls and eventually to a lone Juno monkey, now discontinued, at our offices in Keene, NH. Two days later Azriella had Juno in her arms again! Azriella we hope that your new Juno monkey has brought you some comfort after such a hard time! We think you are cute as a button! 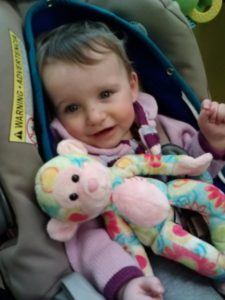 *Special thanks to Roberta Araujo owner of Amazing Parties & Sandcastle Kids in South Hampton NY and Barbara Van Namen our rep with 225 unlimited for getting the word to us about Azriella and Juno. We are so lucky to have amazing store owners, reps and customers! Its stories like Azriella’s and Mason’s that make our days {and hearts} so full – thank you!