Year after year, our varied selection of plush dogs remains an important part of the Douglas Cuddle Toys line. Over time, we’ve featured a number of the public’s favorite breeds in addition to a variety of uncommon and lesser known breeds. One of the most popular breeds over the decades has been the versatile Labrador Retriever. As our style has changed and evolved, we’ve created a number of plush Labs in all shapes and sizes, with each generation being more lovable than the last! Let’s take a look back in time at some of the different Labrador stuffed animals that have become a part of DOUGLAS history! 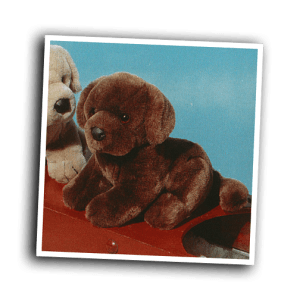 Our very first Labs came onto the scene in the late 1980s. Midnight was a generously sized 25” plush with velvety black fur. Two adorable roly poly puppies named Bud arrived alongside Midnight, one in black and one in yellow. A few years later we added a chocolate version of our popular Bud pup. 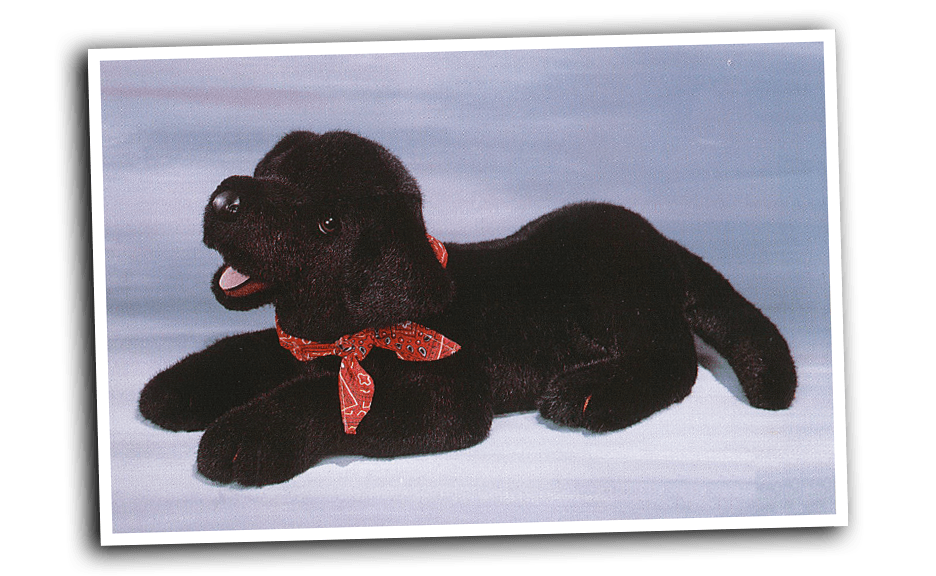 In 1995, our line featured a special Labrador puppet. Her name was Gabby and her large size and realistic pose made her a fun, interactive friend that was the size of a real Retriever puppy. 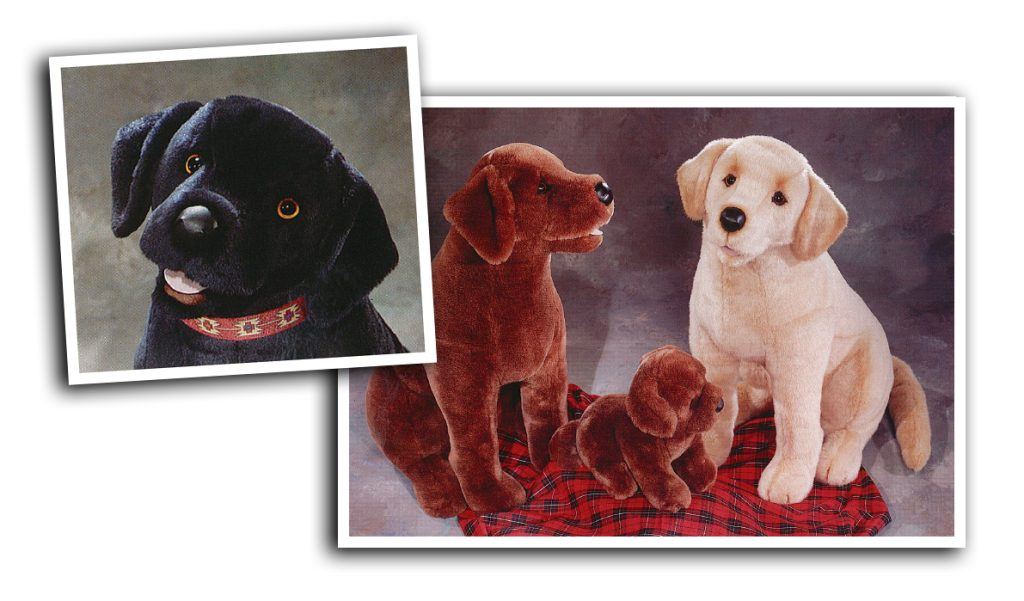 The mid 1990s saw a trio of seated Labradors, each a different color, introduced to our line. Beau the Black Lab came first, then was joined by Dijon the Yellow Lab, and finally, the Chocolate Lab, Mocha, rounded out the group. Around this time, a pair of nearly life size, lying Labradors also became part of the DOUGLAS Labrador legacy. Like Beau, Max the Black Lab also came with a real dog collar. The next year we released Molly, a graceful Yellow Labrador in the same size and pose as Max. Detailed with distinctive expressions and airbrushed accents, these large, stately dogs could very easily be mistaken for the real thing! 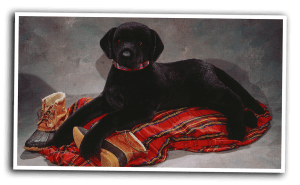 At the very end of the 90s and the start of the new millennium, we introduced a brand new style of Labrador stuffed animal. Floppies! Our extra floppy Labrador trios featured a 12” size, a 16” size, and a Black Lab in an extra large 24” size. We weighted their paws for floppiness, gave them beautiful amber eyed expressions, and they proved paws-itiviely irresistible! In fact, they proved to be so popular, they’re *still* part of our line today over 20 years later! 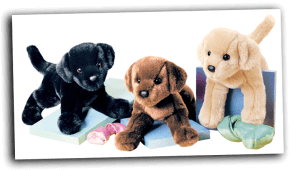 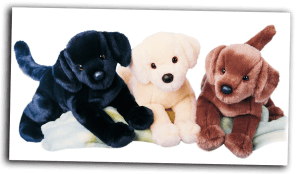 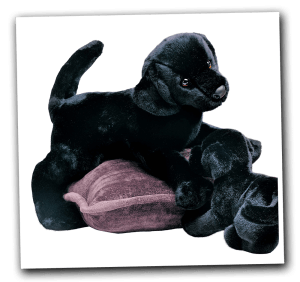 But we weren’t done yet! In 2001, our mini Kohair Labradors joined the party. Silky and soft, Blackie, Clem, and Buttercup were well loved and stuck around for a number of years. 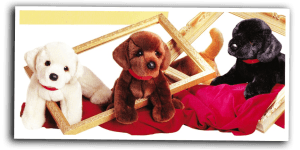 We introduced another trio of unique plush Lab puppies in 2002. Part of our Masterpiece Pups collection, these cuties each came wearing their own red nylon dog collar and had soft, posable bodies with endearing, sad eyed expressions. 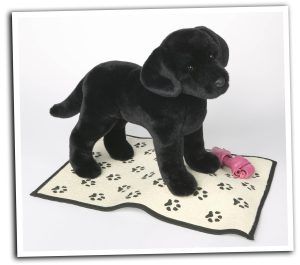 Onyx was a holiday release at the end of 2005. This beautiful 15″ Black Lab stuffed animal featured a standing pose that made him a handsome display plush with an especially realistic look. To date, Onyx is the largest standing Labrador we’ve produced.

Some of our smallest plush dogs joined the line in 2013 with our sitting mini pups. Lucy the Black Lab and Butter the Yellow Lab came first and a few years later, Finn the Chocolate Lab was added to the group.

In 2014, we brought two new sizes of standing Labs to our menagerie that are still part of our line today. The little 8” Labs are just the right size to hitch a ride in your backpack, while the 10” dogs are big enough for hugs without being too big for take-along fun.

Licorice and Marcy were two Labradors introduced in 2016. They were designed in a unique lying pose that exuded comfort and laziness. These cuddly puppies begged to curl up in your lap for a snooze or maybe keep watch over your pillow while you were away at school or work. 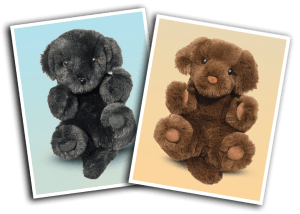 Today, we continue to add adorable new plush Labradors to the DOUGLAS “kennels.” A couple of the most recent include tiny Labrador puppies that feature our adorable cuddle-me design. One look into their sweet faces and you’ll find these little babies are pint-sized doses of cuteness! 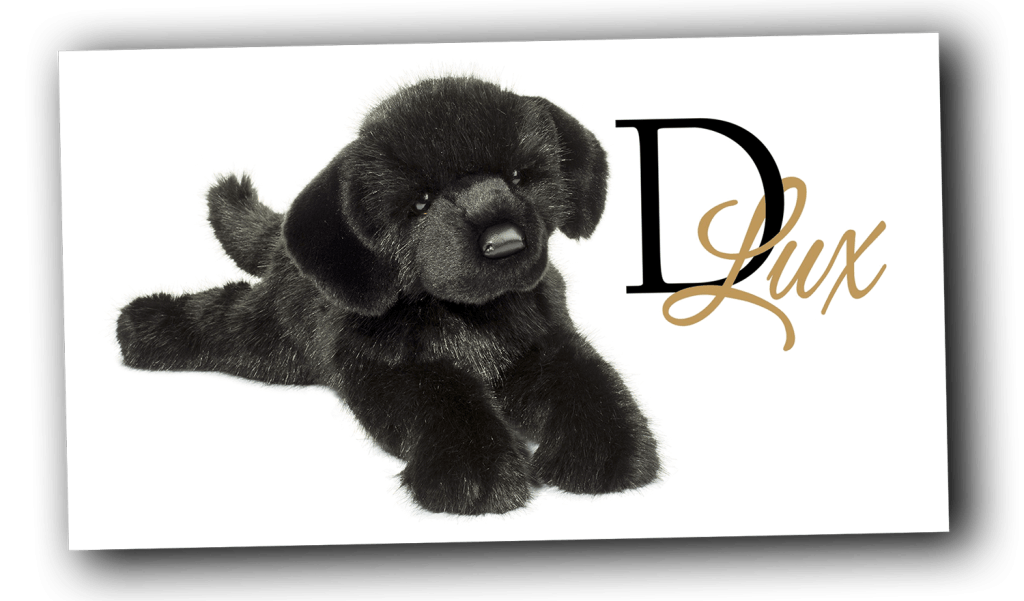 What Labradors will we be making in the years to come? You never know what lovable faces the ever-talented DOUGLAS Design Team has in mind for the future so be sure to stay tuned!